skip to main | skip to sidebar

quote of the month...

okay, there won't be a "quote of the month" installment or anything, but as i flipped through the pages of the october issue of real simple magazine, the following saying jumped out at me:

and it's been on my mind. so much of who we at the valley girl home are slowly becoming can be summed up with this simple little phrase. of course, to make it work for us even better, it needs an addendum of sorts. something along the line of "and don't forget to donate the excess." anyone care to work that into the cute little rhyme?

early this week, we spent a couple of sweltering afternoons parked in our backyard, just making do. lots of icewater and watermelon. our $3 garage sale slide was transformed into a "slippy slide," by simply propping up the hose in one of jeremy's (secondhand) shoes and turning it to the "mist" setting. viola. instant fun. but don't forget a towel at the bottom to prevent grass-burn!

their good fun afforded me a bit of time to tackle a project i've been "meaning to get to" for just about 2 summers. i bought these sandals in spring of 09, and after wearing them only a couple of times, the strap broke. company couldn't replace them for me, as they were sold out. so i kept them around, always meaning to fix the strap. in my past life, i would have simply tossed them. now, i'm making them do so i can wear them out. provided that my sewing holds, of course.

in use it up news, i just finished slow roasting a bunch of tomatoes from our garden. they turned out fantastically, and i'm planning on doing at least a couple more batches. don't want any of those long-awaited tomatoes to go to waste. i'm now looking forward to my lunch tomorrow, as i have goat cheese and fresh bread to pair with my bowlful of tomatoes. a photo may be in order. yum!
Posted by erin at 10:04 PM 1 comment:

is nothing more than a hunk of pizza dough taken from the fridge. rolled in a bit of flour to prevent sticking, then handed over to eager hands, along with some cookie cutters and a pair of rolling pins. it bought me a total of 17 minutes--just enough time to fix a real pizza and slide it into the oven.

we have made play dough in the past, but had neither cream of tartar or food coloring on hand. truth be told, i'm a little reluctant to use food coloring since hudson (obviously) likes to eat the dough. at least we know that this stuff is 100% edible!

the temperature inside of our house has finally gone down from 95 to a much more comfortable 80 degrees. of course, comfortable is a relative term. nothing like a summer-style heat wave to kick off the first week of autumn. hello, california. nice to see you again.

nights like these, we're doing pretty much everything outdoors. cooking, eating and even bathing. well, as far as the kids are concerned, anyway. though if the neighbors weren't a factor, you'd totally find my tush in that tub. it looks quite nice.

an added bonus to all the outside activity is that the inside stays relatively clean. there are fewer dishes, no floor to mop and the ring around the bathtub is non-existent. i'm a full believer in the notion that ring around the bathtub is a sign of great parenting (the dirtier the kid, the better the day!), but seriously, lucy & hudson's bathwater is more like pondwater by the time they hop out of the tub. thankfully, i've found that the homemade laundry soap battles the ring left behind quite nicely. when i get around to it, and all.

three cheers for the heat wave...

trading up? trading down?

we've swapped out a few new items for old items. i'm digging the trade, especially since the vintage stuff was given to us for free by a wonderful and generous family friend. here's how it worked out:

the old: an aluminum "cooky" press...

all the old stuff still in its charming vintage packaging--too cute!
Posted by erin at 8:57 PM No comments:


i hadn't sewed for lucy in awhile, and was looking for an easy project. this little smock from my bend the rules sewing book was the perfect thing--i knocked it out in an afternoon, using vintage sheets and bias tape. lucy threw on the smock and we got down to business making dinner--baked egg cups inspired by a "muffin tin meals" article in a martha stewart magazine. see below for the how-to:

for some reason i stopped taking pictures? must have been hudson up from his nap, broken egg on the floor, dog barking at the mailman, washing machine making a funny noise, phone ringing but nowhere to be found, chickens getting into the house through a hole in the screen door. look at that, i'm practically a country song! anyhow, season with salt & pepper, top with cheese. bake at 35o until eggs are set. mine were overdone. go figure.

my baby has sextuplets...

i say this joking only partway--we quite literally can't leave home without at least one baby doll in tow. the girl who never got attached to a binky or a blanky now has her babies. she picks out their outfits, she feeds them, she shushes them. we all go for walks in the morning and they ride along. she wants them strapped into carseats. she wants them tucked into strollers and buggies and cradles. at night they all get laid out, one by one, and covered with a set of small blankets. "you go sleep now, little babies."

and then we got this book, which quickly became a favorite of lucy's. i found it at a garage sale for a quarter and figured it was a good buy, since lucy's favorite doll is a black baby she's named cookie. cookie came from the thrift store and cost 69 cents. in lucy's eyes, cookie gets major bonus points for the battery pack in her chest--cookie says mama, night-night, and yipee! she also has 2 different crying sounds (kids need to know early on how to decipher full-blown cries from plain old fussing, apparently). 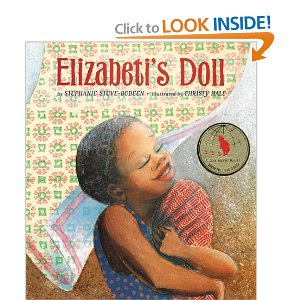 as it turns out, elizabeti lives in a remote african village and doesn't have a cookie-baby. she has a smooth rock--which she bathes, cloth-diapers, and wears in a sling on her back. sounds familiar.

elizabeti has a rock. and we have just shy of 10 baby dolls. or, i should say, had. lucy was brave enough to cut loose 3 of her least-loved babies: sinatra (legs didn't move), tiny (too small, mommy!) and colin (totally looked like a sumo wrestler). we talk a lot about giving toys to children who have none, and lucy seems to understand the concept for the most part. she hasn't mentioned the donated babies but once, and i gently reminded her that she had decided to give those babies to other children. if she sees her babies sitting on the shelf at the thrift shop, it might be another story altogether. which very fondly reminds me of the thrifty chicks blog post do you shop where you drop?

back to the babies. after reading about elizabeti, my providing lucy with 9 babies just seemed a little... over-the-top. gluttonous? the opposite of have less, value more. so, we've pared it down. lucy did her part, and she did it well. which leaves me to hold up my end of the bargain: even though it's cheap and secondhand, we don't necessarily need it.

don't get me wrong--i'm not against rewarding good behavior (a.k.a. bribery) from time to time. but on the same note, i want my kids to appreciate and love the things they have, and not to become apathetic to or desensitized by stuff. i'm personally in the process of getting rid of a lot of things i've been hanging on to for years--and am now questioning why i've kept them this long.

lucy is a fine mama to six babies. six is my limit. any more than that, and i'm trading them all in for a rock!
Posted by erin at 10:16 PM 2 comments:

i thought it was this. but (thanks to my friend molly) i now stand corrected. the very best way to cook kale is as follows: 2-3 tablespoons of coconut oil, melted in a frying pan over medium heat. a teaspoon of finely minced ginger, and 1/4 a small red onion, minced. both tossed in to saute for 2-3 minutes. 1 large bunch of kale, thick stems removed, torn into bite-sized pieces. thrown in to pan, and left to cook until wilted but not mushy. seasoned liberally with salt.

my somewhat-picky-when-it-comes-to-veggies girl devoured half the plate while the rest of dinner was cooking. not wanting to miss out, i devoured the most of what was left. there was, in actuality, very little kale left by the time we sat down to the table. no matter--we had roasted carrots too. enjoy!
Posted by erin at 9:49 PM No comments:

can you see him??? we finally got around to finding ourselves a "10." let's just say it was a tough shot--though hudson put up with being stranded on a random sidewalk pretty well. tiny guy, big world!

"huddie is this many!"

~ standing on his own
~ eating with a fork and spoon (prior to throwing food all over the floor)
~ spitting out the foreign objects he's stuffed into his mouth when asked to do so
~ feeding mama
~ second word: chicken. no kidding!
~ entertaining lucy. this two-kid thing is really starting to pay off.

it's almost time to start planning a birthday party. say it isn't so! this guy keeps us on our toes, but we're head over heels in love with him just the same. happy 10th month, hudson!